Others in the list are Dr Hassan Abbasi who is the Director of Information Services and Government Spokesperson and TSN Managing Editor, Dr Jim Yonazi. TSN publishes the ‘Daily News,’ ‘Sunday News,’ ‘HabariLeo,’ ‘HabariLeo Jumapili’ and ‘SpotiLeo’ newspapers. Dr Mwakyembe said the appointment of the chairman and all other members is a clear evidence that the government is confident in them and that their contribution is expected to move the company forward. “You have been appointed because the government believes in you; we expect this team to record an excellent performance,” said Dr Mwakyembe. The Minister expressed his appreciation to the TSN management saying they have shown good performance in leading the company. “As we launch this new board, I would like to recognise the efforts that have been demonstrated by TSN Managing Editor, Dr Yonazi and his team, they are doing a great job,” said the Minister. He added that TSN’s products are now available not only in Tanzania, but also in neighbouring countries. 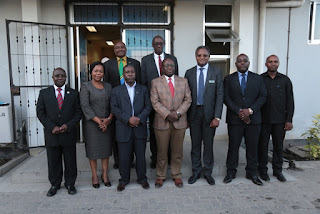 The Minister of Information, Culture, Arts and Sports, Dr Harrison Mwakyembe (Standing in the middle front row)  in a group photo with newly TSN Board members he had just launched in Dar es Salaam on Friday this week.

He said the company is now excelling in various areas including creating selling ideas and coordinating events such as business forums that open business and investment opportunities in various regions across the country. “Today we are talking about a new TSN, a State owned organisation that is committed and prepared to face all sorts of challenges in the market; it a company that competes for businesses and we are all proud of that,” said the Minister. He added, “I would like to assure the new board that the Ministry’s doors are always open for everybody, let’s cooperate to maintain good performance for TSN.” Earlier, the Ministry’s Permanent Secretary (PS), Prof Elisante Ole Gabriel said the appointment of the members of the board of directors followed various criteria as set by the registrar of the public organizations. He said the new board comprises members from different backgrounds, basically to enable it offer profession ad vice. He said the board is made up of a lawyer, economist, an expert on human resources, journalists and an accountant. The new TSN Board of Directors Chairman, Mr Mkwizu assured the Minister that his team will perform its duties basing on professionalism, transparency and patriotism. “This is the State owned newspaper company, in performing our duties, we need to adhere to the established procedures,” he said. He added that the board recognises all media stakeholders and that it will always consider them as strong pillars in moving the company forward.

Giving a brief presentation on the company’s performance, the TSN Managing Editor, Dr Yonazi said: “We have positioned ourselves as a media service company,” He said the company’s dream is to export knowledge and information. According to Dr Yonazi, the company’s performance stands on speed, technology, innovation and responsiveness (STIR). The outgoing TSN Board of Director Chairman, Prof Moses Warioba said he is confident in the new board and that he expects to see TSN recording excellent performance in future. “I will always be available to share my experience and give advice to the new board when necessary,” he said.